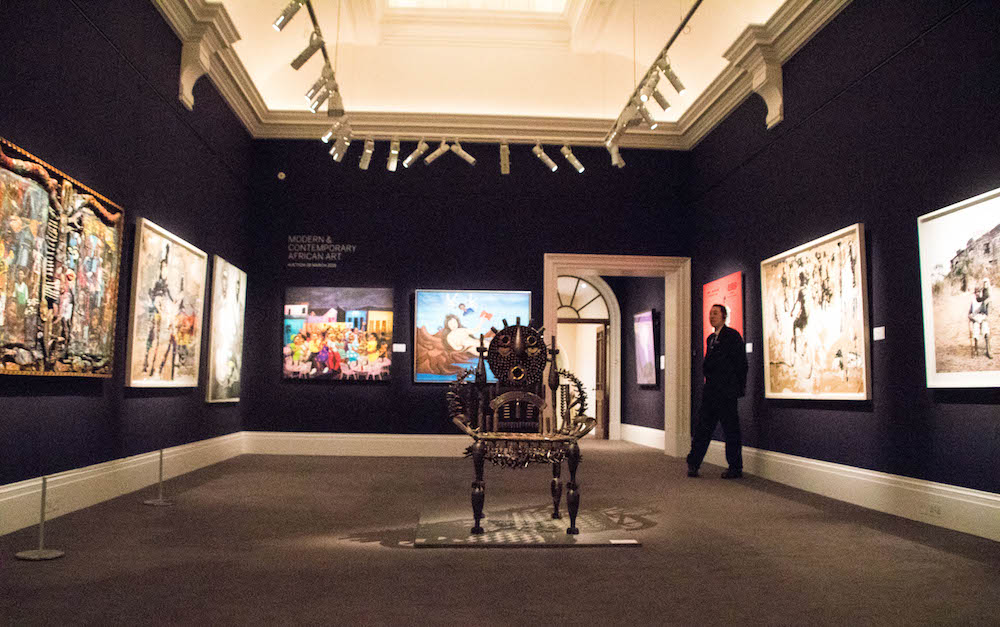 The hotly anticipated 2nd auction of modern and contemporary African Art at Sotheby’s was a success thanks to the diversity of the selection and a revised price strategy. Here are the key points to keep in mind.

It has been quite a few extraordinary months in the ever-growing world of modern and contemporary African art. After the headlines grabbing auction at Bonhams, thanks to the reappearance of the modernist Ben Enwonwu’s famous painting “Tutu,” the second African art auction at Sotheby’s was hotly anticipated, and it didn’t disappoint.

I went to the exhibition ahead of the auction, and I was struck once again by the wide variety of the selection on display. There were overall 106 artworks by 60 Artists. The diversity also stretched from the type of materials used to the medium of expression, varying from photography to sculpture and paintings. The main gallery featured Pascale Marthine Tayou’s stunning abstract artwork made of chalk and charcoal. As a singular item, each artwork was an engaging expression of the creativity of its author. As a whole, the selection was a testament to the vibrancy of the African art scene.

The auction was a real success with a total sale of £1,802,750, a little over the highest estimate of £1,707,000 and as such, is a success even when compared with last year’s record-breaking £2.7 million results.
Sotheby’s entry into the African art sector with a dedicated auction in May 2017 marked a significant milestone. It appeared to validate the viability of this segment of the market, a further confirmation that the rising interest in African Art was not a mere mirage, a temporary bubble set to disappear.

The £2.7 million sale was the highest ever recorded in a single auction of African Art. However, the focus on the record took the spotlight away from a significant shortfall. The sales were barely above the lowest estimate. So it was interesting to see how the team led by Hannah O’Leary would approach this year’s auction.

The overall number of artworks remained similar to last year’s 114. However, the prices of the selected works were significantly lower this year. About 95% of the artworks was priced at £30,000 or lower against £90,000 last year. There was not a single artwork whose highest estimate exceeded £100,000. It has proven to be a success since 78% of all artworks was sold compared with 69% for last year. According to the African Market latest report, the average sell-through rate was 72% in 2016.

Once the auction started though, several artworks did exceed the £100,000 threshold. It is fair to say that at the moment Ben Enwonwu and Njideka Akunyili Crosby are the artists to watch at auction.
All eyes were on Ben Enwonwu’s work after the record-breaking £1million achieved by the iconic painting “Tutu” (the portrait of a Nigerian princess painted in 1974) at Bonhams’ “Africa Now” auction in February. This time, his painting “Africa Dance” fetched £187,000, over 6 times its estimate.
Meanwhile, Akunyili Crosby’s “A La Wharol,” a thoughtful and a pensive painted self-portrait, was sold for £200,000, 3 times its highest estimate. It came as no surprise as last year, one of her larger piece of multi-layered paintings, “The Beautyful Ones” was sold for over $3 milllion (£2.5 million) at Christies’ Post War & Contemporary Art evening auction in London. It set a new record not only for the artist but also for the African artists in general.

Several other artists have seen their work significantly appreciated in value at the auction. Eddy Kamuanga Ilunga and his series of paintings depicting the Mangbetu, (a tribe whose identity and survival is threatened by the rampant modernisation in his native Democratic Republic of Congo) have set a new record of £60,000. Claudette Schreuders’s sculptures, Frederic Bruly Bouabre and Gerard Sekoto’s paintings have also been sold way above their highest estimates.

As to Cheri Samba, his vibrant paintings had already caught collectors’ attention last year with a significant gap between the estimates and the recorded sales. The upward shift continued this year with his aptly titled “J’aime la couleur” (I love colour) that sold for £50,000.

Works by acclaimed artists El Anatsui and Yinka Shonibare took center stage at last year’s inaugural auction. This year, however, the spotlight shifted onto young emerging young and mid-career artists such as Ibrahim Mahama and Nandipha Mntambo. Mahama’s impressive textile installation made of jute sacks, fishing nets and Dutch wax fabric is an exploration of the complex link between colonisation, trade and cultural identity in his native Ghana. The picture of the artwork was also on the cover of the catalog. Meanwhile, Nandipha Mntambo’s sculptures also featured prominently in the main gallery.

Much has been said about the rise of African Art in the last few years. Some go as far as to call it “African Renaissance” pointing to the stronger expression of the African identity and the ongoing concerted effort to increase African representations in the art world.

On the continent, new art initiatives are flourishing: from the first African edition of 1:54 Art Fair, to the launch of new Museums, Zeitz Museum in Cape Town and MACAAL in Marrakech. They indicate a structural shift, with the development of infrastructure aimed at fostering the growth of the often-neglected African creative industry.

From a business standpoint though, the auction remains one of the ultimate tests. With the opacity that pervades the whole art world, the auctions are the few occasions when sales data can be collected, analysed, and we can all get a view – even if it is partial – of the financial health of the market. In that context, Sotheby’s second modern and contemporary African Art auction is good news for the sector. The steps they have taken to improve their sales performances could even be a source of inspiration for others smaller players. I also hope that these results will be replicated at the upcoming and unprecedented Contemporary African Art auction at Piasa in Paris next month.