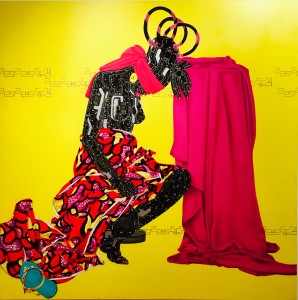 Eddy Kamuanga Ilunga is a young Congolese Artist. In his paintings, he explores the tension between tradition and modernity through the current fate of the Mangbetu people.

The Mangbetu are a small tribe in the Democratic Republic of Congo (DRC). Originally a warrior tribe from Sudan, they have migrated and settled in Congo in the 18th century. Once a proud tribe, reputed for their crafts and their beautiful elongated heads, they are now reduced to a remnant group of elderly people. Like endangered species, their very existence and their culture are slowly dying out. Their elongated heads that used to be a distinct and proud sign of their tribe, have turned into an insult among their fellow citizens who value modern beauty standards. 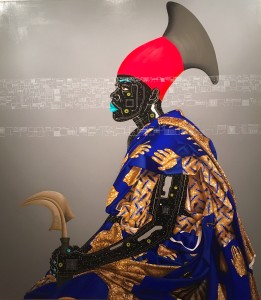 It is likely that Eddy’s paintings will, one day, be one of the few traces left of the Mangbetu tribe. In his paintings, he restored some of their lost dignity. He has painted them with their tools and their intricate symbols, testament to their developed craftsmanship and their fight to preserve some of their heritage from being looted. Their beauty is reinstated with elegant wrapped heads and the flamboyant wax prints they wear.

Yet, the wax prints, the nail polish, the crucifix are all signs that they have embraced some aspects of modernity that is slowly eroding their own culture. Predominant and omnipresent signs, similar to microchips, mark their whole skin in almost all of the paintings. In the past, in some parts of Africa, peoples’ identity and ethnic group were visible on their faces through scarification. In these modern times though, these signs are not only on their faces but all over the Mangbetu people’s bodies manifesting a complete cultural take over. It is almost a condition that they can’t escape as it is so engrained in their flesh.

The details in these paintings unveil the research done in exploring the past and the challenges ahead as the Democratic Republic of Congo and especially Kinshasa the capital, is embracing modernity at a breakneck speed. This exhibition of Eddy’s latest works is a vibrant display of the cultural price that is being paid as a trade off for modernity. By turning the spotlight on the fate of the Mangbetu tribe, his works has transcended painting to raise broader philosophical questions about cultural identification and Globalisation.

These paintings, with the microchip signs are fast becoming Eddy’s Trademark. At just 24, his take on the complex balance between tradition and modernity has created a unique style of painting that combines style and substance effectively.

In the last few years, the Democratic Republic of Congo has emerged as a buoyant artistic Centre on the African Continent. The country is mostly associated with the “Popular Style” of the painters of the previous generations. However, as this exhibition shows, with Eddy, there is a new generation of young artists emerging, who are developing their own style and along the way challenging their society about its choices.