Nigerian Hybrid Culture through the eyes of 10 emerging artists

There is historical evidence that the Portuguese were present on the west coast of Africa in the 15th Century. Present day Nigeria fell under British Rule in the 19th century with the official protectorate signed only in 1901.

What happens to people’s identity and culture after at least six centuries of international trade, cross-cultural exchange interspersed with a period of slavery and colonisation?

The question is at the heart of the exhibition “Cu-culture and Tradition: Same Experience, Different Local,” where 10 Nigerian artists, young heirs to this rich and complex legacy, narrate through paintings, photographs, and music, their visions of their contemporary hybrid culture.

The mixed culture they depict is unequivocally Nigerian (Yoruba masks) and features simultaneously adopted elements from other cultures. This delicate cultural balance is best visible in the work of Denis Osadebe and Williams Chechet.

Their vibrant pop universe is a seamless fusion of tradition and modernity. You may have never thought of a Punk Funalli, yet that’s the vision William Chechet brings to life with the portrait Sani one blow from the series “We Are The North.” It’s younger counterpart could be found in Denis Osadebe’s paintings featuring a young man wearing sportswear and a Yoruba mask.

The cultural encounters that engendered this hybrid culture were most often than not conflictual. They were based on the premise of domination that bears cultural consequences still visible today.

Jumoke Sanwo challenges that legacy and some of its negative stereotypes in her multimedia installation. Stepping away from a western vision that has compartmentalised art practices, she interrogates Nigeria’s past through music and photography in an echo to traditional customs that mixed music, songs, dance, and visual art. 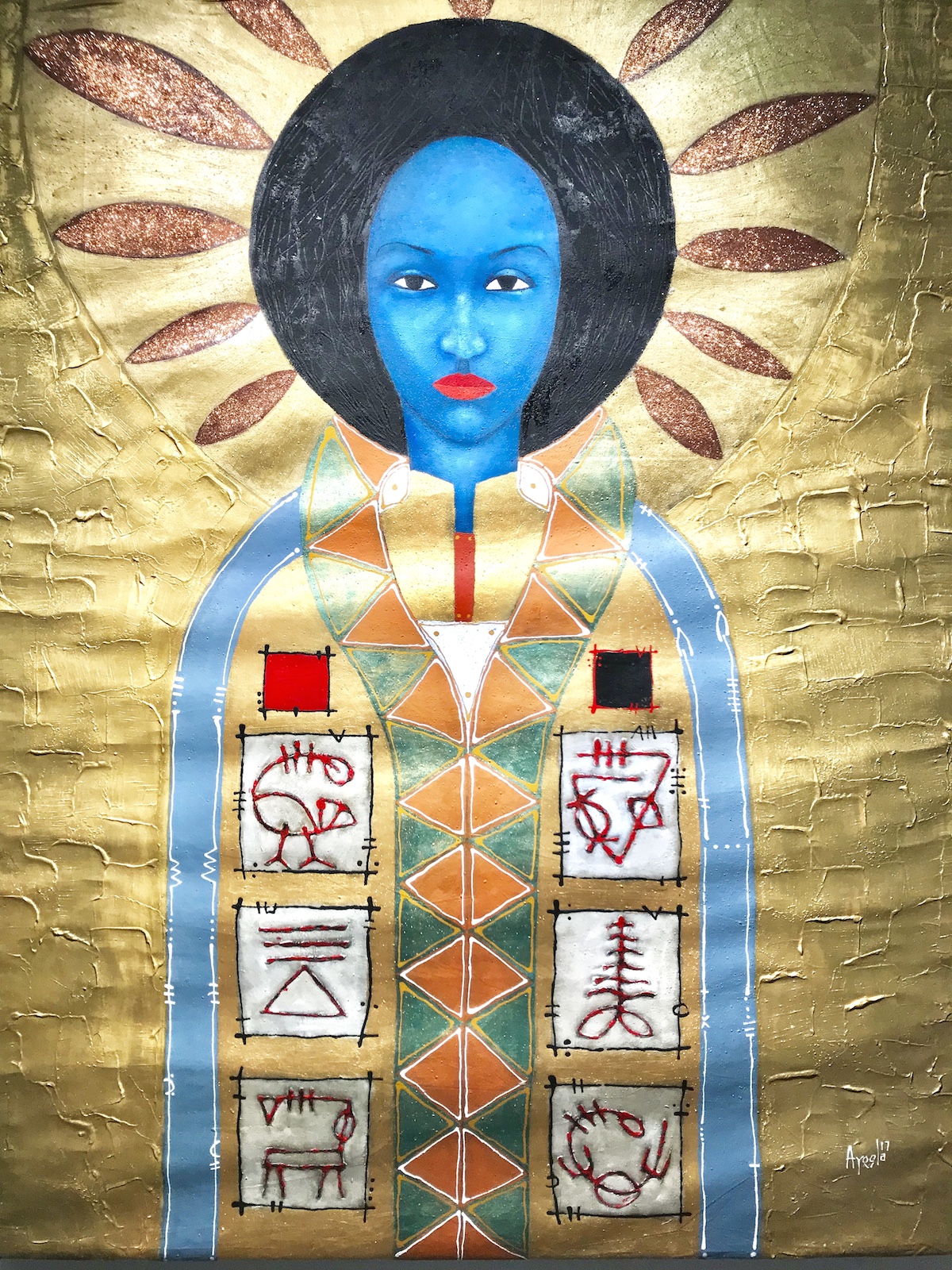 Gbolahan Ayoola’s blue paintings series are positioned at the intersection of femininity and spirituality, questioning women’s absence in leadership roles in monotheist religions.

While other works in the show raise the issue of representation, as a whole, the exhibition reminded me of what French poet Edouard Glissant called “Mondialite.” It stands in sharp contrast to globalisation that entails a standardisation of the world and reduces diversity. Instead “Mondialite” requires us to open up to other cultures and evolve. It is what he called a “trembling identity.” That mixed and fluid identity is best encapsulated in the vibrant portrait of “Funke” by Uzoma Anyanwu (2017). The historical legacy of the wax prints used to create the beautiful face of Funke, the symbol of the future generations, stretches from Indonesia to Holland, to West Africa and China.

Cross-culturalism is the future, that is stating the obvious. How we negotiate those relationships and ensure fair representation and preserve diversity is one of the significant challenges for the future generations…. and these artists have brought some possible answers.

This is the last week to see “Cu-culture and Tradition: Same Experience, Different Local” at the Koppel Project Hive in London. The exhibition finishes on Nov 16th.
Curated by Adeola Arthur Ayoola of Kanbi Contemporary.