Before the coronavirus pandemic had ground most activities to a halt, we strolled through London for a pre-spring art crawl, looking at works by African artists, and by and large, Black contemporary artists. We also added other exciting ongoing shows and exhibitions due to open. Here is what was meant to be the March guide to 8 Contemporary African Art exhibitions in London.

It is official! The film director, Academy Award and Turner Prize winner Steve McQueen is taking over both Tate Modern and Tate Britain.
McQueen’s Years 3 exhibition at Tate Britain is a monumental take on the classic classroom photo. The diversity among a new generation of Londoners is laid bare in 3,000 photos of seventy-six thousand pupils accompanied by their teachers.
Years 3 at Tate Britain, is running concomitantly to the artist’s newly opened retrospective at Tate Modern. It encompasses fourteen pieces of work (videos, photos, and installation) created over two decades. Seen together, they emphasize McQueen’s experimental approach to filmmaking. Case in point, the unsettling Charlotte (2004), a close-up video of the artist’s finger probing Charlotte Rampling’s eye and Cold Breath (1999) a video of the artist stroking his nipple. Away from the fast-paced environment of the movie theatres where McQueen’s feature films are shown, the retrospective is a call to slow down and take the time (allow plenty of time to queue and to see the videos) for a full immersion into the artist’s universe. McQueen seamlessly moves from Static (2009) a shaky video loop of the Statue of Liberty that interrogates the contemporary meanings of the towering symbol of freedom and hospitality, to the dark world of gold mining in South Africa with Western Deep (2002).

The retrospective runs from February 13th to May 11th, while the Year 3 exhibition will close on May 3rd.

The Nigerian American artist Kehinde Wiley is best known for his vibrant portraits of Black men cast with the visual language and codes of the monumental royal portraitures often referenced in art history. The artist became art royalty when he was commissioned to paint President Barack Obama’s official portrait in 2018. Wiley depicted Obama, minus the royal aggrandisement, in a relaxed pose against a backdrop of dense green foliage that denoted a sharp departure from traditional presidential portraiture.

Now, Wiley has turned his trademark’s dense and intricate background into a vivid yellow, populated with William Morris’ inspired motifs to bring to life his latest visual commentary on women’s agency for the exhibition “The Yellow Paper.” It’s worth going first through the permanent exhibition dedicated to William Morris, to gauge the commonality Wiley sought to create between his new portraits and Morris’ work.

Kehinde Wiley: The Yellow Wallpaper at the William Morris Gallery runs from February 22nd until May 25th. 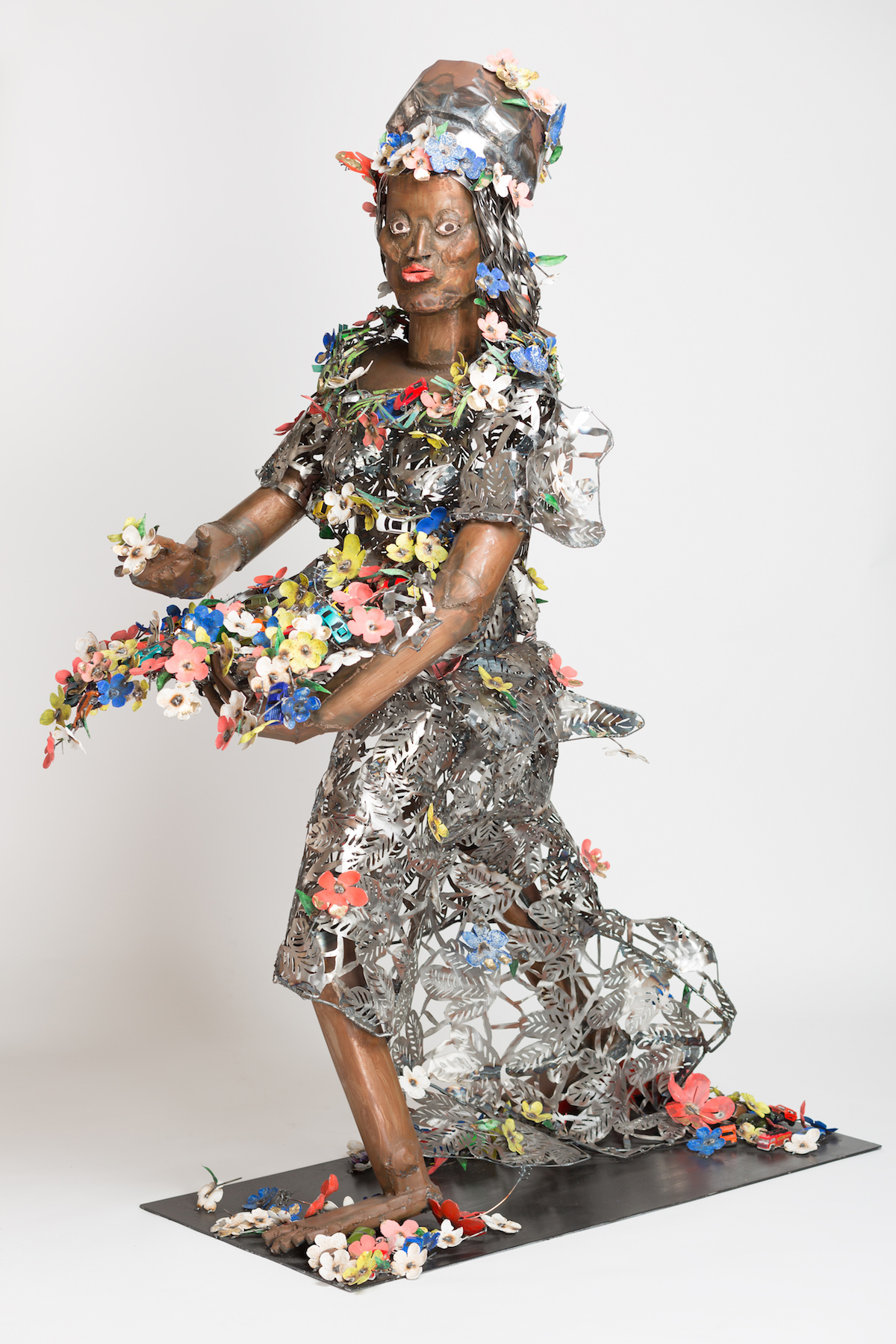 October Gallery returns with a yearly group show featuring contemporary artists from around the world. Since its inception, the gallery has been championing the work of African artists and others whose artistic expressions are embedded with narratives and materials beyond the realms of traditional European art. The gallery’s latest exhibition, Atmospheres, includes work by El Anatsui, James Barnor, LR Vandy, Alexis Peskine and many more upcoming contemporary artists.

Atmospheres: runs at the October Gallery, until March 28th

Sculptural works such as those included in the British Museum’s The Art of a Nation (http://obatala.co.uk/blog/art/south-africa-the-art-of-a-nation-at-the-british-museum/) have long been a vital medium of expression in classical African Art before two-dimensional artworks (paintings, drawings, photographs) took precedence within contemporary African art. The 4th edition of Bronze, Steel, Stone and Bone at Everard London is the opportunity to get reacquainted with the sculptural creations from the continent, especially those originating from South Africa.

Bronze, Steel, Stone and Bone at Everard London, will conclude on March 28th

In 1935, art historian Kenneth Clark foretold the death of painting in his famous essay “The Future of Painting.” With no demise of the medium in sight, others anticipated figuration would fall into oblivion, wiped out by the irresistible rise of abstraction in the fifties. This prediction didn’t come to fruition either. Instead, a new generation of artists is extending the longevity of the figurative genre by pushing its boundaries, stylistically (by fusing it with abstraction) or technically (with textures and deconstructed bodies), or with the choice of the subject matter. The representational works of ten such artists (including the rising contemporary star Tshabalala Self) are on view at the Whitechapel Gallery’s Radical Figures: Painting in the New Millennium. The Highlights of the show include Christina Quarles’ melding of various styles and techniques within a single work along with Michael Armitage’s Mydressmychoice (2015).

Radical Figures: Painting in the New Millennium at the Whitechapel Gallery runs until May 10th

Toyin Ojih Odutola is also among the artists who have been pushing the boundaries of figuration, in her case, with a unique, lively rendering of skin. Her drawings raise questions about identity, representation, and mythology as much through the fictional narrative brought forth, as with the technique utilized: layers upon layers of black ballpoint pen ink.

Toyin Ojih Odutola’s first-ever exhibition in the UK will be a visual fictional narrative “of an ancient civilisation in Central Nigeria, dominated by female rulers.”

The artist will be in conversation with sound artist Peter Adjaye (who created a soundscape in response to her work) and independent curator, Erin J. Gilbert, on March 27th.

The exhibition “A Countervailing Theory will open from March 27th to  July 26th.

Further to an inaugural appearance at the last edition of 1:54 Art Fair in London, Tiffanie Delune returns with a solo show “Seeds of Light” curated by independent curator Katherine Finerty.

Radiant and bold colours coalesce generously with curvaceous shape to form a dynamic narrative on “Spirituality” and “Childhood memories:” the titles of the new body of works included in the exhibition.

Stay connected online (Facebook, Instagram) to see short videos of ongoing exhibitions you may not be able to see.