20 African Art & Design events you need to know about 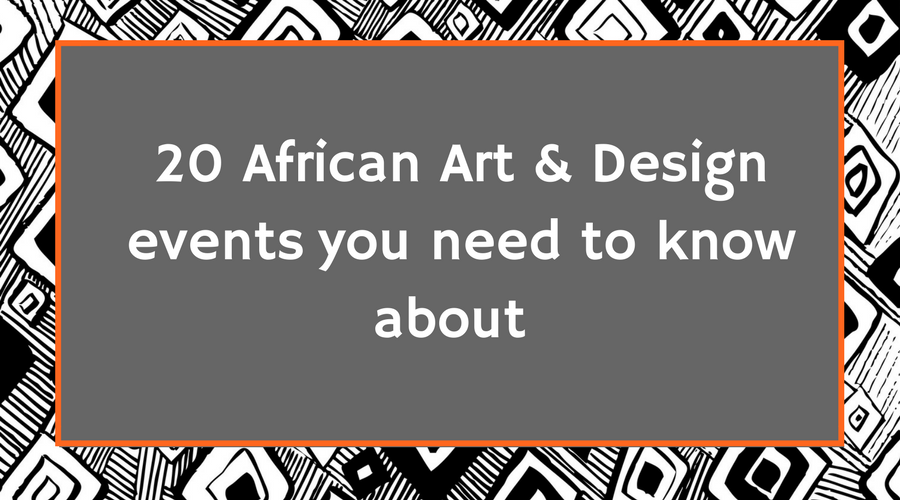 The African continent is at the epicenter of attention. For decades, art emerging from the continent has been hastily categorized as “exotic”, “primitive” and cornered into specialist shows. However the convergence of a series of factors, the emergence of contemporary African art, some high profile fairs and exhibitions and the success of some artists who managed to harness the power of social media, have contributed to a major shift in perception.

This is evident in the record level of growth recorded in African art in the last few years. This shows no sign of abating, sustained by both international collectors and wealthy Africans keen to invest and to promote their heritage. In a game of catch up, a record number of exhibitions and fairs have been organized so far this year, and the second half of the year is set to be just as riveting. Here is a selection of 20 African art and design events not to miss.

1. Lagos Photo Festival
From Oct 21st to Nov 20th, Lagos will become the pulsating heart of photography with the Lagos Photo Festival. Artists are invited to draw on the past to examine our representation of the truth for this year’s theme “Regimes of Truth”. It is guest curated by the celebrated fashion designer Duro Olowu.

4. The inauguration of the Zeitz Museum for Contemporary Art Africa (Zeitz MOCAA)
The Zeitz MOCAA, the biggest of its kind on the continent, is set to open in September. Its ambition is to showcase contemporary art from the continent and the diaspora. 3 inaugural exhibitions have been scheduled so far:

The first one is dedicated to the visual artist Nandipha Mntambo. In her work, she explores various mythologies and the questions of mortality using natural, organic materials. She is renowned for her sculptures made of cow skin, that challenge pre conceptions about the female body.

The two other exhibitions are dedicated to the artist activist Kudzanai Chiurai and the Angolan artist Edson Chagas.

5. 100% Design South Africa
Here is an opportunity to dive into the world of african Contemporary Design at the convention center in Johannesburg from 9th of August to 13th.

6. Museum of African Contemporary Art Al Maaden (MACAAL): “E-mois” Exhibition
With “E-mois” , MACAAL is turning the spotlight on their own collection. They are recounting their quest for identity through the art works they have acquired over time.

Jean Pigozzi, on the advice of Andre Magnin, has built one of the most extensive collections of contemporary African art. “The Insiders” reveals part of that collection for the first time in Paris.

“Being there” focuses on the contemporary South African art scene. It showcases well-established artist such as William Kentridge alongside young emerging ones.

To finish, a selection of African art works from the Foundation’s permanent collection is also on display. Overall, the works of about 38 artists will be shown over 3 levels through the foundation’s building. Until September 4th.

8. Islamic Treasures of Africa – From Timbuktu to Zanzibar
The Arab World Institute is showcasing the rich spiritual and cultural exchange that occurred between the Islamic World and Africa and how that is still manifesting itself in various creative disciplines such as Architecture, Arts and Craftsmanship. Until July 30th .

10. AKAA: Also Known As Africa
After a successful first edition with over 15,000 visitors, the Contemporary Art & Design Fair returns to Paris from November 10th to 12th of November.

11. Summer Exhibition 2017 at Royal Academy of Arts
This year, the traditional summer exhibition features an unprecedented number of artists from Africa and its Diaspora such as Yinka Shonibare MBE, Hassan Hajjaj, Zav Ove or Modupeola Fadugba.
From June 13th to August 20th

12. Serpentine Pavilion 2017
The Berlin based architect Francis Kéré was commissioned earlier this year, to design the Serpentine Pavilion. Inspired by the big trees of his native Burkina Faso, Kéré’s design brings to London, a modern, airy, tree-shaped building that is also a place for the visitors to gather and socialize until October 8th.

13. “Tushauriane: Let’s talk about it”
Until July 29th the artist Naomi Wanjiku Gakunga (also featuring at the Royal Academy of Arts) presents her latest series of work in her second solo exhibition at the October Gallery in London.

15. Weaving Magic
At the National Gallery, the Dovecot Tapestry Studio has transformed Chris Ofili’s paintings into tapestry. Until August 28th

16. 1:54 Art Fair
The international Contemporary African Art fair returns for its 5th edition at Somerset house, from 5th to 8Th of October.

17. The Venice Biennale
Of the eight African countries taking part in the 2017 edition of the Venice Biennale, the two that have attracted the most attention are South Africa and Nigeria. The former draws acclaim with the works of the artists Mohau Modisakeng and Candice Breitz. Nigeria is attending for the first time, presenting installation and performance that are articulated around the country’s past, present and future.

Have you been to any of these exhibitions? Let us know what you think.