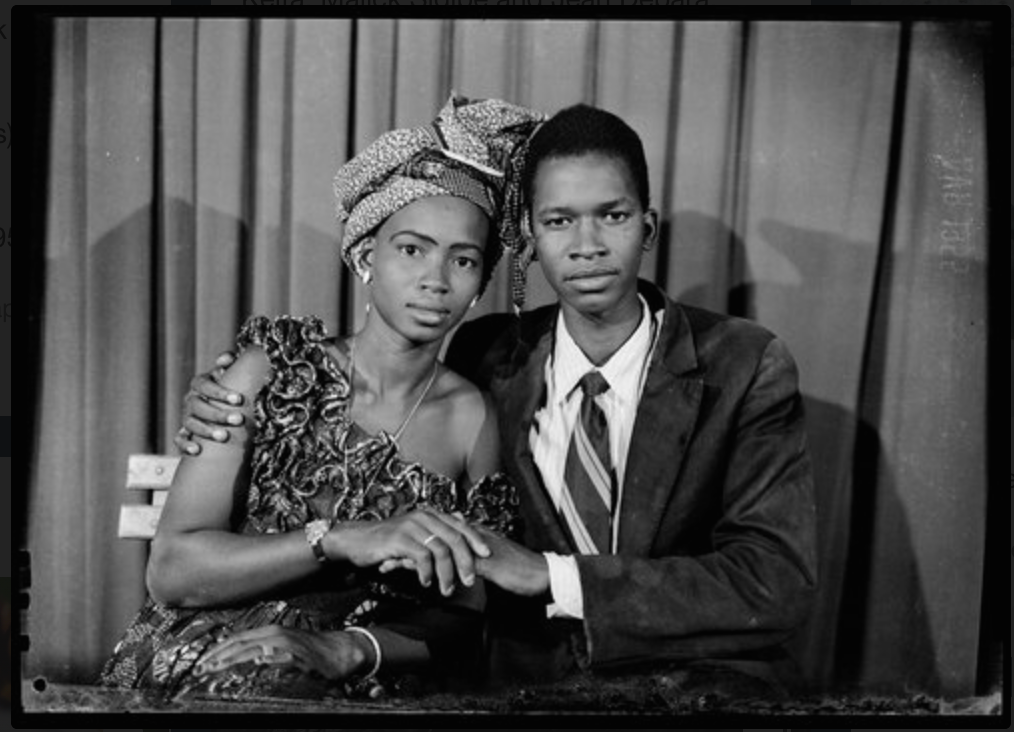 From Rodin’s marble sculpture to Rembrandt’s Jewish Bride and Gustav Klimt’s The Kiss, love has long been a reoccurring and popular theme in art. What is less so, is the representation of Black people showing the same sentiment. Paintings, photographs, sculptures representing black romance, passion and love are surprisingly scarce. So this year, in honor of Valentine’s Day, we have decided to look into the work of 5 artists who made the radical choice to depict love in all its shapes and forms through the ages within the black community and beyond.

Vignette (The Kiss), turns us into passers-by who stumble upon a scene of two young people sharing a passionate kiss on the steps of a building, oblivious to anything else that may be happening around them. The vignette was inspired by a real couple Kerry James Marshall saw while driving in a suburb of Chicago, most often associated with crime. In an interview he said “the historical narrative of Black people in the United States is associated almost exclusively with a kind of trauma, so I decided that I would make pictures that really went all the way in, trying to represent a kind of relationship between black people that demonstrated a certain kind of affection for each other.”

Kerry James Marshall’s art practice is centered on the representation of black figures positioned in spaces they are rarely seen in or partaking in activities they are seldom associated with. So it comes as no surprise that love, black love features in several of his works.

Slow Dance, was included in Marshall’s travelling retrospective, Mastry, that debuted in his home town at the Chicago’s Museum of Contemporary Art in 2016. The artwork portrays a couple locked in a warm embrace with their joint bodies seen almost as one. Both are lost in their “slow dance” in this cozy setting, whose decor references their Yoruba (Nigeria) and Haitian culture.

Njideka Akunyili Crosby is a visual artist born in Nigeria and based in the US. She is famous for her densely layered multimedia compositions made of drawings, photography, and transfer that question cultural hybridity. The artist’s relationship with her husband and their shared intimate moments feature preeminently in her work. Their love is one that transcends continents and cultural differences.

Malick Sidibe lived through a particularly joyful time in Mali’s history: the sixties when the country was celebrating its newfound freedom after gaining independence. The photographer is remembered most for his images of nightlife in Bamako when he captured a young generation dancing feverishly on the twist and other newly discovered tunes. However, he also shot the young generation’s daytime outings by the river Niger where freedom became synonymous with love and intense embrace.

Seydou Keïta was a contemporary of Malick Sidibe (albeit a decade older). They worked in the same era and captured the same generation of young Malians but from very different perspectives. Seydou Keïta worked mostly from a small studio, and he took the unique shot of each client only after careful staging and positioning. We know little about their identities, but their intimacy and love shine through the lenses and the decades.

The fictional Black people that occupy Toyin Ojih Odutola’s imagined world and are brought to life on her canvas are self-confident, proud and exude an extraordinary level of swag. They are often seen in novel and unusual situations including a passionate kiss between two young men.

She turned smiling toward her partner. For a moment that lasted long enough for this black and white picture to be taken, she has eyes only for her. Her happiness matched and mirrored in the loving and smiling face in front of her. Eric Gyamfi is a Ghanaian photographer. His series Just Like Us highlights the daily life of the queer community in his native country. Often marginalized and threatened, the series demonstrates that “the others” feel the same emotions as everyone else: Love.