Discover Seydou Keida at the Grand Palais in Paris 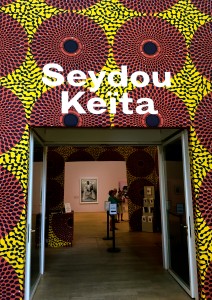 As I stood in front of the Grand Palais, admiring the architecture, I couldn’t help thinking that the imposing building was a good fit for another giant: The Malian photographer Seydou Keita who revolutionized the art of portraiture in the fifties, although the world wide recognition would only come much later.
Leaving the hustle and bustle of Paris behind, I plunged into a decade of Malian society as captured by Seydou Keita from the mid fifties until mid sixties. Seydou Keita was born around 1921. A carpenter by training, he caught the photography bug after his uncle gave him a camera as a gift. After perfecting his art, he opened his own studio in the family compound in 1948. His distinctive signature was a three quarter length portrait taken at a diagonal angle. The beautiful pictures were a result of a successful portrait recipe that he invented: Natural light and patterned wax prints as a set up, for his clients, a carefully choreographed posture, enhanced by various props; cars, radio etc.
In our world of selfies and digital pictures taken at a fast pace with a press of a thumb, it can be hard to imagine how much of a change he was bringing about at the time. However, his pictures marked a real break from tradition in a Muslim society were portraiture was frowned upon. It comes then, as no surprise that most of his customers were young people, usually the first to embrace change and modernity. 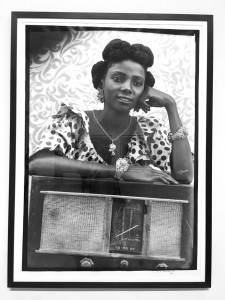 In various interviews and in quotes displayed in the exhibition, Seydou Keita reiterated how important it was for him to show his clients in the best possible light and make them look as beautiful as possible. The 300 portraits in the exhibition are stunning and certainly live up to his stated objectives. Handsome men and elegant women portrayed on their own or as friends, lovers or family. Their choice of clothing and props, hint at a society in the midst of a cultural shift and turning toward modernity. His photography resolutely reframed the narrative around African people and modern African identity. In the context of an oral society, the photographer, unknowingly, became an historian who preserved the mood of his time and the memory of a society undergoing fundamental transformations.

As he became successful, people queued to have their pictures taken and his influence grew way beyond Mali’s borders. There were portrait studios all over Africa that emulated him. Some of the portraits took me back to my own childhood in Togo, West Africa. I remember vividly dressing up for some special occasions and the photographic session in an official studio that ensued. Back then, I didn’t know anything about photography, but as I made my way through the exhibition, I recognized some of the poses we took then as typical Seydou Keita’s. You can still feel his influence in the works of some of the African artists emerging today such as Omar Victor Diop. 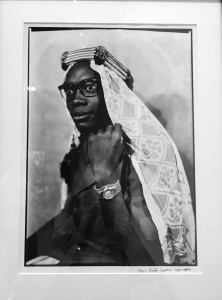 The Seydou Keita retrospective is a world first and one not to miss if you are in Paris. You will find yourself transported, temporarily, into another world.

The retrospective has unveiled to a larger public the visual genius of a man who quietly changed portraiture and gave African people the means to portray themselves as who they were or what they aspired to be. A universal need that is being fulfilled by different means today.

The exhibition at the Grand Palais runs until July 11th. http://www.grandpalais.fr/fr/article/seydou-keita-toute-lexpo.
Check for the major African Art exhibitions in the world this year.