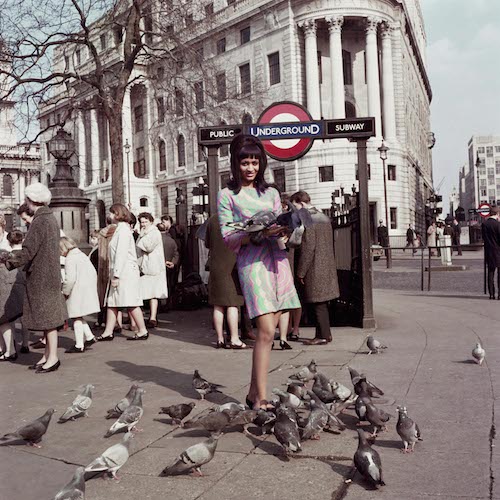 Dear James, you are a pioneer among African photographers. You were the first Ghanaian photographer to shoot the cover for Drum, one of the first black magazines in the Sixties. We wanted our readers to learn more about your background and the impact of your work.

You trained as a basket weaver and worked as a teacher, what made you take up photography?

As I always say, Photography was practiced in my family: I had two maternal uncles who were Professional Photographers, when I was born; there were also two cousins well vexed in photography. I did not associate with any of them seriously but I remember showing an interest when I left school. I wanted to become a Police Photographer!
Somehow or somewhere along the line I ended up serving a two year apprenticeship with Mr. J.P.Darku Dodoo, one of my cousins, running a thriving practice in Accra Ghana.

You specialised in street & portrait photography in Accra. For the first time, Ghanaians were seen through the lenses of a black Ghanaian photographer, how did that impact the way they were portrayed and the image they projected?

Photography was not new to Ghanaians; though not everyone had the chance of being photographed by an amateur with a box camera, or going to studio for a portrait; in the cities especially, people with cameras were a common sight. Professional portraiture was usually by daylight since there was plenty of it.

Being the first to be engaged to work on the newly established modern newspaper printing press in Ghana 1950, my horizon completely changed! I was everywhere. Before then all the news was printed on letterpress and there was no need for a photographer for daily supply of pictures.

The arrival of the “Daily Graphic” an off shoot of the London “Daily Mirror” was a revolution in Ghana. It changed the perspective of how people saw the effect of photographs in their lives. The first time people saw daily events published in pictures was fantastic. For me it was like living in two worlds: there was the careful handling of a sitter in “my studio” with a big camera on a heavy tripod, and then running around town chasing news and sports, or going to the homes of VIPs with a rollfilm camera! And serving the Editor!

You were operating your studio when Ghana was fighting for independence and you took some pictures of Kwame Nkrumah, the future leader of Ghana. Can you tell us more about the mood of the country? What did it feel like to be Ghanaian at the time?

Most Ghanaians especially the youth were excited, and very much involved with the fight for Self Government and subsequently Independence from the British Government. As a newspaper photographer it was much more interesting since one was in the thick of it, all the time!

There were people who hated me for working for a “White Press” which was not taken lightly during ‘the struggle’, and others who took it as progress. That was a very interesting time in my career.

I got the opportunity of getting familiar with all the Members of the Legislative Assembly who later became Members of Parliament, after Independence in March 1957. I photographed every one of them.

You moved to London and continued working for Drum, what did your cover picture & the magazine represent for the African diaspora at the time?

At the end of 1959 I moved to London primarily to improve on my photography. I gained a Ghana Cocoa Marketing Board Grant to attend College. I studied Colour Processing at CPL, Edenbridge, Kent, and studied at the Medway College of Art in Rochester, Kent.

Having served the Drum Magazine in Ghana, I was given assignments by the London Editor to photograph the Cover Girls in colour, plus black and white photos and personal stories for the inside pages. Some were professional models but I found some suitable girls who were not. There was a London Edition which became very popular with the Diaspora. It was the Drum that made Black Models come to light in the 1960s and 70s.

You photographed Muhammad Ali, can you tell us more of how that came about and your memories of that experience?

My assignment, again for the Drum which brought me face to face with the great Muhammad Ali, when he was preparing to fight Brian London. I met him training in a crowded gym but was so star-struck, I did not say one word to him; I went with a model who acted as the interviewer so I was saved! I did not go to the fight, I watched on TV, but later I met him again in a London West End Hotel to take some more photographs of him. During my career, meeting and photographing Muhammad Ali, The Greatest, was the most exciting assignment.

The retouching step, to make people look forever young & beautiful has become very predominant in fashion photography. There were several cases where people protested at the sight of their own images on magazine covers. As a photographer, what do you make of that trend? Have we as a society gone too far in altering portraits?

During the sixties when I photographed for the Drum, colour photography was not so advanced and I did not even think of a means of enhancing the appearance of the faces of my models; they were not retouched. Looking back on it now, I would not mind slight retouching of any blemishes, but not to the extent that we see on present fashion magazines. Incidentally the name of my own Photographic Studio had the name…”EVER YOUNG’ derived from a story I learnt from school , which went like this: “Iduna, the beautiful young goddess of the Norsemen lived in a pretty grove called Ever Young. She had a golden casket full of the most wonderful apples: a hero might come, tired and weary feeling that he was growing old, then Iduna would give him an apple, and as soon as he had eaten it, he would feel fresh and young again. It was not surprising that Iduna’s Grove was never lonely, and what was still more surprising was that the casket was never empty, …. as soon as the last fruit was given away, the casket was filled again by an invisible hand”. My studio practice of retouching on the plate negative with a sharp pencil, was following the portrait photographers of old , and making my sitters look younger but not to change their appearance in anyway.

Street & portrait photography are enjoying a renaissance. What advise would you give to a photographer starting now?

My first advice to anyone intending to be a Photographer: first arm himself or herself with EDUCATION which I missed and still regret! Also plan your photos and how to use them.

The ongoing exhibition of Daniele Tamagni & James Barnor runs until September 30th 2016 at the October Gallery in London.
The interview has been edited and condensed for clarity.